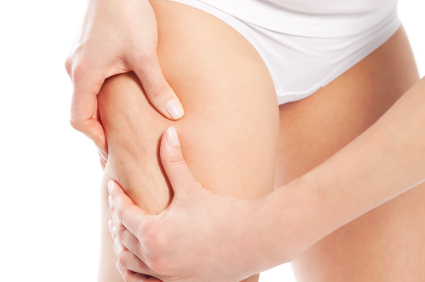 Contrary to popular belief, Cellulite isn’t just caused by excess fat and can occur on even the slimmest of women.

With summer here and the prospect of exposing Cellulite-stricken skin imminent, I’ve been doing a bit of research into the matter and came across some interesting info courtesy of Australian nutritionist Cyndi O’Meara.

It seems that the following factors can contribute to Cellulite:

2. Nutritional deficiencies – a diet deficient in protein isn’t able to support the connective tissues that keep skin strong and firm.

3. Poor circulation & digestion – if your body doesn’t efficiently digest protein it is unable to select the correct amino acids responsible for the above process.

5. Diet high in dairy and sugar

6. Environmental pollution, chemicals and toxins – toxins can become lodged around connective tissues, causing them to break down and ‘ripple’.

7. Stress – burns up valuable nutrients that could otherwise have been used to repair connective tissues.

How can I get rid of it?

I’m still dubious as to whether you can ‘get rid’ of Cellulite, and would be suspicious of any products or therapies that make that claim without scientific evidence.

That being said, by preventing and avoiding these key causes and triggers, you can certainly prevent and diminish its appearance.

For me – the toxins factor is key. ‘Toxin’ is a general term for a substance or chemical that has no positive use in the body.

These can be ingested, absorbed or inhaled via pollution, pesticides and additives in foods, and chemicals in personal care products amongst other things.

Avoiding these can have a raft of health benefits, although it’s easier said than done considering their abundance.

Interestingly, Cyndi O’Meara believes there’s a direct correlation between the rise in “modern” health problems and our increased consumption of toxins:

‘Forty of fifty years ago, something changed…people became more interested in nourishing their brain with information and less worried about what they fed their bodies.

This was the beginning of the takeaway age; fast foods, new technologies, genetically modified foods and the introduction of thousands of never-before-seen chemicals into our food chain.

Since then, many new health problems have reared their heads’.

What do you think? Are you bothered by your Cellulite? And do you think it’s a relatively “modern” health issue?