I battled chronic urticaria in my 20s, which although endlessly irritating and often disheartening, did lead me to create Pai Skincare in order to soothe my skin. So there was a silver lining. However when my son Jack came along and developed eczema not once but twice – my own skin battle felt totally manageable in comparison to the frustration I felt for him.

My son’s first episode of eczema came when he was two and a half, the second when he was just turning six. I found both times really upsetting – it really took me back to the dark days of my own skin challenges. Seeing your child in emotional and physical discomfort is a killer. As a parent you feel like It’s your job to fix it, but anyone who knows eczema knows that applying a cream and clearing it up in three days just doesn’t happen. It really is a process.

I think it’ll be helpful for me to share what worked for us both times, the first, potentially difficult to hear insight being that it took about six months each time to clear it up from onset to finish. It appeared differently each time on different parts of the body, and he responded to different treatments each time too. What I’m getting at is that eczema is a complex beast. My first piece of advice is to take a deep breath, try to remain super-calm and embark on clearing your child’s eczema through trial and error, methodically noting down everything as you go.

As is the case with many sensitive skin reactions, his first flare-up developed at a time of high stress for him. You guessed it, the tell tale rashes began to appear shortly after his little brother was born. We don’t think about the impact of stress on children and their skin in the same way we do with adults, but I am sure he felt displaced and upset at the time. I tried a bunch of things. It is a lot of guesswork – but cutting out washing powders definitely helped. Washing detergents leave behind residue, which can take five water-only washes to get out of clothes. So I completely eliminated all washing powder. A few months later, it did seem to make a difference, and for some people that can actually be all that’s needed.

The second thing was bathing. Ingesting oats is sometimes problematic with certain skin issues but used topically can be brilliant. I filled a tights sock with oats, tied it and left to really soak in a warm (never hot) bath so that the bath water looked like milk. This was particularly powerful as his rashes were on the backs of his legs, ankles, all the way to his bottom. The redness would be visibly reduced each time after soaking.

I think people jump to exclusion diets too quickly with children – our very experienced and trusted childminder at the time cautioned me about excluding entire food groups from children so young without proper supervision. Especially if you don’t reintroduce the foods quickly, and properly. So I didn’t go down that route, but I did consult our local naturopath and looked at some supplements instead – we went for omega 3 drops (on toast so he couldn’t taste it) – and that really helped clear up his legs.

Episode two was when he was five going on six, and at school! This time it was made worse because he felt quite self-conscious, even though I told him how it was totally normal and lots of other children experienced it too. He still felt like he was the only one though. The eczema was on his arms this time, the whole length of them, and his skin was cracked and very sore. I did lots of the same stuff as before – some worked, some didn’t. This time I really wanted to stop him from scratching, and break the cycle of irritation so his skin could start healing. Even though he tried so hard not to scratch, he did actually do it in his sleep! So we found the best thing was for him to sleep in cotton gloves every night. And it made a huge difference.

One thing I wish I’d known the first time around is that even though it feels counterintuitive, when their skin is really dry and sore you actually should bathe them every single day. Sufficient time in the bath is important to really hydrate – between five and 10 minutes, Do make sure to time it, overdoing it isn’t helpful either. Then once they’re out pat the skin dry very carefully, making sure not to rub. Essentially, you need to remove the moisture within 30 seconds before the air removes all that hydration, we then applied our Petit Pai cream straight away. Once he had his shortie pyjamas on – they let the skin breathe and stop sweat forming in the skin’s creases – I’d apply our Buriti Balm on top just to lock in all that moisture. I did lots of the same things as before too – like cutting out washing detergents and taking the supplements – but that combination of cotton gloves and oat baths every single day seemed to make a big difference the second time around.

Remember it is a long process. We managed to crack it in six months but it can take an awful lot longer. Try not to lose faith though, and keep working at it meticulously. We’ve been doing this a long time here at Pai – and have helped so many customers and their children with their skin reactions and flare-ups. So if you need to talk things through – perhaps you’d like help starting a skin journal, or maybe you just need a refresher in ways to manage flare-ups – we offer a free consultation service which can be booked online. Our Sensitive Skin Experts will be on hand, ready to help. 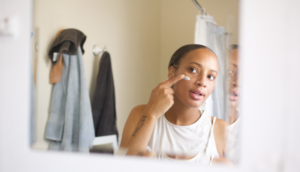 Should I Wear An SPF In Winter Too?