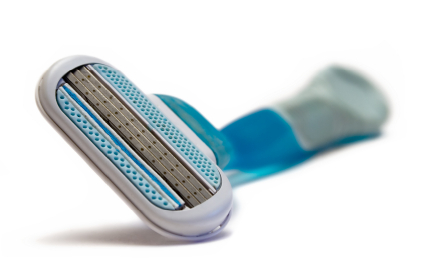 Ingrown hairs often pop up out of nowhere and can be a real pain!

As well as being unsightly, the small red bumps can be uncomfortable and in some instances can scar if you don’t deal with them correctly.

What is an ingrown hair?

An ingrown hair is one that hasn’t emerged from the hair follicle, but has curled  around on itself and grown back into the skin.

This is usually caused by a build up of dead skin cells that ‘block’ a hair’s path, causing it to grow sideways under the skin rather than upward and outward.

The resulting blockages look like small spots. While they may often go unnoticed, some ingrown hairs can become red, inflamed and painful.

Why do I get them?

Waxing and shaving is the most common cause of ingrown hairs as you’re regularly removing hair from below the follicle’s edge.

While most people are likely to suffer with ingrown hairs now and again, it’s thought people with naturally curly hair are more likely to get them as their hair is more inclined to grow back on itself.

Ingrown hairs can sometimes also be caused by overly tight or rubbing clothes.

How can I get rid of them?

Gentle exfoliation is the best way to prevent and remove ingrown hairs as they draw it to the surface and help remove any dead skin cells in the way.

Try a gentle Muslin Cloth in the shower for daily exfoliation that won’t irritate your skin.

If, after a few days, you can see the tip of the hair poking through then gently pull it out with some tweezers.

Once you have removed it, clean the area and apply a drop of antibacterial lavender oil to aid healing.

Make sure you don’t break the surface of the skin though so as not to cause an infection!