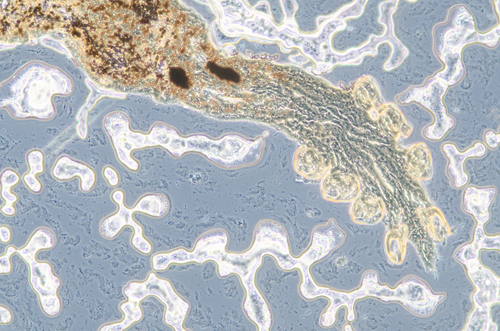 Rates of allergies and associated conditions are on the rise – latest surveys show that up to 30-35% of people are affected worldwide.

Initially, this increase was seen in countries such as the UK, Europe and USA, but can now be found in all developed countries.

Digging a little deeper, I discovered that levels of eczema have risen dramatically in the last few decades.

Some experts have even gone as far as labelling it as an epidemic.

So, what’s causing it?

If you’re of a queasy disposition (or about to eat your lunch!) then I advise you to read no further…

A doctor friend shared an anecdote with me about the link between our super clean, modern living and the emergence of more cases of eczema.

It shocked me: Eczema is potentially being linked to the absence of hookworms!

Traditionally, of course, we all dread hookworms – the parasites that live in the small intestine of their hosts.

That said, although hookworms affect over half a billion people globally, their marked absence in our antibacterial-obsessed society is fast becoming considered a hindrance.

The human immune system needs to come into contact with bacteria while it is developing at the infant stage. This exposure enables it to respond appropriately to infections that our bodies encounter later in life.

Being exposed to germs developed our defence systems appropriately. Nowadays, our ultra-hygienic living conditions do nothing to promote the immune system development to the right levels.

Our super clean living environments (with their lack of bugs and gut parasites – including hookworms!) are becoming attributed to a massive rise in allergic and auto-immune conditions like eczema.

How history (and worms) have changed our immunity

Over millions of years, worms have evolved and found methods to reduce immune responses to prolong their survival inside the human body.

This relationship seems to have become so interlinked that without gut worms or other parasites, our immune system can become unbalanced.

Less protection promotes the development of skin conditions like eczema and other allergies and respiratory problems, such as asthma.

We are more susceptible to allergies as our bodies just aren’t built to defend against them.

Research has strongly indicated that there’s a link between worms and eczema. The latest study took place in a rural area of Vietnam.

More than 1,500 schoolchildren, aged 6 to 17, took part. Here, testing showed that two in every three children have hookworm and other gut parasite infections.

Amongst this group, however, the level of allergies like asthma and skin conditions such as eczema was incredibly low.

Two surveys on a sample of 4,169 German children, further establish the link between eczema and worms.

This study found that this condition occurred significantly less frequently in children who had worms, compared with children without such a history.

The presence of worms in the children infected was found to be strongly associated with a reduced frequency of subsequent eczema, too.

Using worms to protect our skin

Researchers and biomedical companies have begun to investigate the potential of using worms to treat conditions – ranging from eczema and asthma to psoriasis and even autism.

Helminthic therapy is the treatment of autoimmune conditions and immune disorders by means of vaccination of the patient with a helminth (parasitic worms such as hookworms).

The immune system launches an attack when helminths infect individuals and attach themselves in their hosts’ gastrointestinal tracts.

It also issues a chain of anti-inflammatory orders to ensure the response does not get out of hand.

The results so far are significant: people who successfully survive infection also seem to pass on immune advantages to future generations.

Up to 50% of children in the UK are now diagnosed with an allergic condition.

Could the lack of hookworms really be responsible for the rising rates of conditions such as eczema?

It will be interesting to see how the scientificresearch develops on this front.

It’s got me considering how we can help to combat the reduced effectiveness of our immune systems.

I’m not suggesting we all quit washing our hands or encourage our kids to eat mud, but it’s certainly got me thinking.

By living in a super clean environment, maybe we’re not equipping our bodies to cope with as many germs as they should be able to.

Has anyone got any thoughts on this topic? I’d love to hear from you!